Gerald S. Ohn is an attorney with significant experience prosecuting and defending a wide range of litigation, including class actions, on behalf of individuals, businesses, corporations, and governmental entities in state and federal courts.

Mr. Ohn is a trial lawyer who has successfully conducted jury trials in state and federal courts, including against major law firms. Mr. Ohn has also made winning oral arguments in appellate court. Accordingly, Mr. Ohn is well versed in all phases of litigation from inception through verdict and appeal.

Gerald S. Ohn was selected by the Rue Ratings’ Best Attorneys of America for the 2015 list.

For 3 years in a row from 2012 to 2014, Gerald S. Ohn was selected as a Rising Star by the Southern California Super Lawyers magazine. This recognition is also published in Los Angeles magazine. This distinction is given to only a very small percentage of California's attorneys each year. Attorneys are only considered for selection if they have attained a high degree of peer recognition and professional achievement across numerous indicators. The selection process is multi-phased and includes independent research, peer nominations and peer evaluations.

In 2013, Gerald S. Ohn received the highest available rating of 10.0 and was described as "Superb" by the lawyer rating website Avvo.com.

In 2012, Gerald S. Ohn was admitted to The Order of Distinguished Attorneys for the Beverly Hills Bar Association in recognition of Mr. Ohn's outstanding dedication to the legal profession.

Prior to establishing the Law Offices of Gerald S. Ohn, Mr. Ohn was a Principal at a prominent law firm in the San Francisco area.

Mr. Ohn is a former Deputy Attorney General with the California Department of Justice in Los Angeles.

Mr. Ohn was a Litigation Associate at international law firms in Los Angeles.

Mr. Ohn was a clerk for the Alliance for Children’s Rights in Los Angeles.

University of Michigan Law School, Juris Doctor
Mr. Ohn was an editor on the Michigan Journal of Race & Law; a guardian ad litem with the Child Advocacy Law Clinic; and a member of the Asian Pacific American Law Students Association.

Gerald S. Ohn and his co-counsel were appointed as Class Counsel in a consumer class action on behalf of over 80,000 consumers across the United States of America and obtained final approval of a national class settlement with a total economic value of over $2 Million and injunctive relief.  In this regard, the California Superior Court Judge presiding over this complex class action litigation noted that Mr. Ohn displayed a high level of skill in presenting complicated and difficult legal issues and that his efforts in this action and the results obtained provided great value in the public interest.

When a union member's medical records were mailed, during a union election campaign, to thousands of his coworkers by a union employee in violation of his civil rights, including under the Americans With Disabilities Act, he turned to Mr. Ohn to seek justice on his behalf. Utilizing cutting edge, aggressive and efficient litigation strategies for the union member plaintiff, Mr. Ohn defeated the union employee defendant's Anti-SLAPP motion after obtaining leave of Court to take her deposition, obtain documents and subpoena third party records; exhausted the union member's administrative remedies on his claims against the defendant union entities; and ultimately obtained a tremendous settlement at a very early stage of litigation for the union member plaintiff that included a substantial monetary recovery and injunctive relief. Trials Digest called this a "notable" settlement and featured it on the cover of the June 25, 2012 issue.

When a wheelchair bound individual applied in person to rent an apartment in Los Angeles, the apartment manager repeatedly informed him that he did not meet the financial requirements to be able to rent an apartment there. Then, after the disabled individual would submit documentation indicating that he met the qualifications reflected in the rental application and the apartment’s written policies, the apartment manager would change the qualifications or add new requirements in a blatant effort to prevent the handicapped individual from renting an apartment. The disabled plaintiff came to Mr. Ohn to fight for his rights. Mr. Ohn filed a housing discrimination lawsuit for violation of the federal Fair Housing Act, the California Fair Employment and Housing Act, the Unruh Civil Rights Act, and the Disabled Persons Act. Shortly thereafter, Mr. Ohn obtained a strong settlement on behalf of the handicapped plaintiff that included a monetary recovery and an agreement that the property owner and apartment management company defendants would change their policies and procedures and provide training to their employees regarding applicable housing discrimination and disability rights laws.

A California based company and its officers were sued by a former business partner and officer seeking hundreds of thousands of dollars in compensatory damages for, among other things, breach of fiduciary duty, breach of contract, and violation of California's Unfair Competition law. With the trial in this California civil action scheduled to begin in less than two months, the company and its officer retained Mr. Ohn as trial counsel. Using aggressive and effective motion and deposition practice, Mr. Ohn obtained a highly favorable settlement for his clients of essentially one thousand dollars on the eve of trial.

When a California corporation and its Chief Executive Officer were sued by a much larger competitor under, among other things, California's unfair competition laws seeking monetary compensation, injunctive relief and punitive damages, they turned to Mr. Ohn. After taking just one deposition and utilizing aggressive and effective motion practice in this California civil action, Mr. Ohn successfully obtained complete summary judgment in favor of his clients.

On November 8, 2014, Gerald S. Ohn served as a speaker and faculty member at the continuing legal education program on the Art of Negotiation: A Learn-by-doing Opportunity at the National Asian Pacific American Bar Association Annual Convention in Arizona.

On May 22, 2014, Gerald S. Ohn served as a panelist on a continuing legal education program regarding Criminal Law Issues In Personal Injury Litigation at the Beverly Hills Bar Association in Beverly Hills, California.

On April 17, 2014, Gerald S. Ohn served as the moderator for a continuing legal education program on Exhaustion Of Administrative Remedies Against Government Entities at the Beverly Hills Bar Association in Beverly Hills, California.

On November 9, 2013, Gerald S. Ohn served as a faculty member at the program on the Art of Negotiation at the National Asian Pacific American Bar Association Annual Convention in Kansas City.

On November 7, 2013, Gerald S. Ohn was a panelist at the National Asian Pacific American Bar Association Annual Convention in Kansas City on the Nuts & Bolts of Starting Your Own Law Practice: Fundamentals and Practical Considerations. 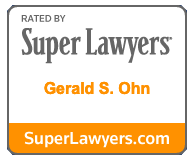